When you or a loved one is suffering from addiction and a mental or behavioral health disorder, the best recovery solution is to find a drug rehab center that treats both conditions.

An integrated treatment approach at America’s Rehab Campuses can help you experience a full, lasting recovery and prevent one condition from worsening the other.

Speak to a treatment consultant today about our specialized mental and behavioral health programs.

What Is a Dual Diagnosis?

A dual diagnosis, also known as co-occurring disorders, is when a person is diagnosed with both a substance use disorder and a mental or behavioral health disorder. Both types of disorders share many of the same risk factors, such as having a family history of addiction or mental illness, trauma, genetics, and environment. When left untreated, a dual diagnosis can lead to worsened mental health symptoms, and a highly severe addiction that can lead to overdose or death.

Does One Disorder Cause the Other?

Substance abuse can trigger one or more mental illnesses, while the reverse is also true. Long-term use of drugs and alcohol can change the structure of the brain and the way it functions to cause depression, anxiety, schizophrenia, and other mental health disorders. Substance abuse can also lead to the development of compulsive behavior disorders, like binge eating and gambling.

Mental health and behavior disorders can lead to substance abuse when people use drugs and alcohol as a way to numb or escape their symptoms. For example, a person battling post-traumatic stress disorder (PTSD) or depression may drink alcohol every night in an attempt to sleep better and avoid unpleasant thoughts. However, long-term use of substances will often exacerbate symptoms of mental illness.

Have more questions about Mental and Behavioral Health? 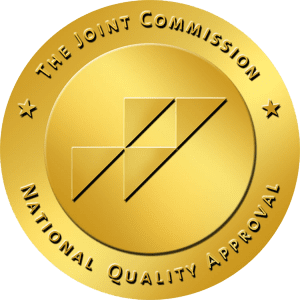 America’s Rehab Campuses is Accredited by the Joint Commission

Which Mental Illnesses Are Most Common With Addiction?

Certain mental illnesses are found to be more common with addiction than others. This is due to the way substances interact with the same neurological pathways in the brain as mental health disorders. For instance, alcohol interacts with a brain chemical called serotonin, which plays an important role in mood and depression.

Mental health disorders that commonly co-occur with addiction include:

Which Therapies Are Used to Treat a Dual Diagnosis?

A dual diagnosis is treated using a range of psychotherapies that can take place individually or in groups. Cognitive-behavioral therapy (CBT) is one of the most common therapies offered at drug and alcohol rehab that helps you identify and change harmful behaviors and thought processes contributing to both the addiction and mental illness.

Dialectical behavior therapy is a type of CBT designed to address suicidal tendencies and borderline personality disorder. Suicidal tendencies are a common drug-withdrawal symptom and are also closely linked to depression, bipolar disorder, and PTSD.

Interpersonal therapy focuses on improving communication with others and learning how to respect their needs. Family-focused therapy aims to improve dynamics within families affected by addiction and mend relationships with those you may have hurt on behalf of substance abuse or mental illness.

Which Medications Are Used to Treat a Dual Diagnosis at Drug Rehab?

Medications can be used to treat both drug dependence and mental illness at drug rehab. Many drug and alcohol detox treatments use medications to relieve physical withdrawal symptoms, like headaches, nausea, and congestion. In some instances, medications like Suboxone and methadone are used in drug detox to replace opioids and relieve all related withdrawal symptoms, including those that are psychological.

Medications that may be prescribed for mental and behavioral health disorders include antidepressants, antipsychotics, mood stabilizers, anti-anxiety medications, beta blockers, and prescription stimulants. Your doctor will work with you one-on-one to develop an individualized treatment plan for your dual diagnosis. Not all treatment plans involve the use of medications.

America’s Rehab Campuses offers fully integrated alcohol rehab programs for those who need help recovering from alcoholism. Our treatment programs have been thoughtfully designed to individualize treatment for each patient and begin with a biopsychosocial and medical evaluation by a medical doctor and psychologist.

Fill out our insurance verification form today or call 833-272-7342 to learn more about your benefits and deductibles for addiction treatment.