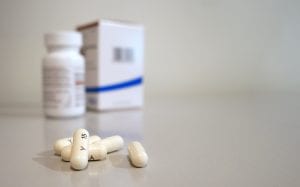 Xanax, which is a brand name of alprazolam, is a type of benzodiazepine. Benzodiazepines are prescription drugs commonly used to treat anxiety disorders and panic disorders. They can also be used for depression and premenstrual syndrome. When taken correctly and as prescribed, Xanax is not very addictive. In fact, it’s classified by the DEA as a Schedule IV drug, meaning it has a low risk of abuse and dependence.

Speak to one of our treatment consultants today about our specialized Xanax detox and inpatient programs.

To combat these symptoms, it’s best to enroll in a drug and alcohol rehab program. In a drug rehab program, you’ll get medically supervised care to guide you through the withdrawal process.

Increased tolerance is another problem of long-term Xanax use. This is when your body requires a higher dose of Xanax to achieve the same effects. Studies aren’t clear on when exactly increased tolerance starts to form, which is why it’s so important to follow your doctor’s directions when taking the drug.

In 2013, there were over 48 million alprazolam prescriptions dispensed in the United States, meaning nearly one-sixth of the country is on the drug. Unsurprisingly, it’s the second most common prescription medication according to data from emergency department visits.

So what can you do if you’re addicted to Xanax? The first step is to find a drug detox center to help you safely wean yourself off Xanax. After you’re clean, the next step is finding a drug and alcohol rehab facility.

In drug rehab, you’ll receive a combination of therapies to help you change your outlook on life. These therapies work to change your drug-seeking behaviors so you’ll be less likely to return to Xanax in the future. Some of the therapies you might see in drug and alcohol rehab include:

If you’re misusing Xanax, don’t let yourself become another statistic. Get the help you need today to start taking back your life.

America’s Rehab Campuses use medical detox and many evidence-based therapies that can be personalized to help you or a loved one safely overcome Benzodiazepine addiction. Fill out our insurance verification form today or call 833-272-7342 to learn more about your benefits and deductibles for addiction treatment.